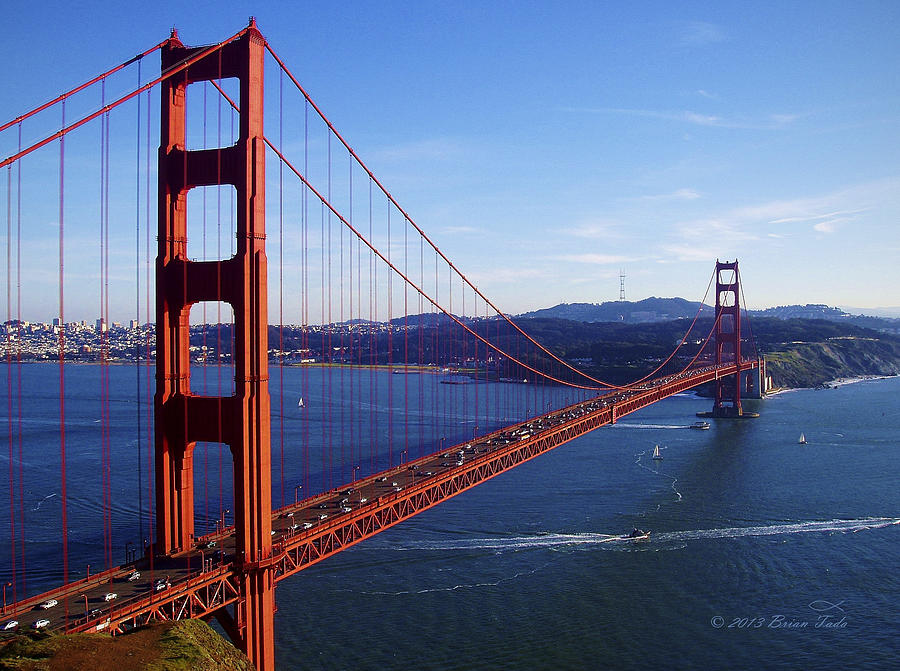 On the spur of the moment I took a break from errands to enjoy a close-up view of the famed Golden Gate Bridge on a spectacularly sunny Saturday afternoon in late January 2013.

This photo was taken while standing on a hill at Fort Baker in the Golden Gate National Recreation Area (GGNRA), part of the National Park Service. To the left of the bridge is the skyline and bay of San Francisco, with Sutro Tower atop the mountain in the distance near the center of the photo. The Pacific Ocean is to the right of the bridge.

I've traveled over this icon literally thousands of times, but rarely paused to see it from this vantage point where "you are so close you could almost touch it" as one visitor remarked. An armada of boats on San Francisco Bay were out in force, with at least five watercraft passing under the majestic span within a couple of minutes.

It's good to take periodic breaks from ordinary routine to savor the extraordinary. Life was meant to be lived with variety!

Seeing the West Coast's version of the Golden Gate -- the other Golden Gate is an ancient gate in the eastern wall of Old City Jerusalem, Israel, where I've also had the honor of visiting -- reminds me of Psalm 24:9-10 (NKJV):

For well over a century before its realization, the dream of spanning the Golden Gate Strait north of San Francisco had been birthed.

Construction on the Golden Gate Bridge commenced on January 5, 1933. The fabricated steel used in its construction was manufactured by Bethlehem Steel plants in New Jersey, Maryland and Pennsylvania, and shipped through the Panama Canal to San Francisco.

When it opened to traffic just four years later on May 28, 1937, it was the world's longest suspension span, a record held for 27 years until New York City's Verrazano Narrows Bridge was opened on November 21, 1964, which is 60 feet longer than the Golden Gate Bridge.

As of January 2014, 2,025,883,491 vehicles have crossed the Golden Gate Bridge, including northbound and southbound, since its opening in May 1937. The bridge carries traffic for U.S. Highway 101 and California Highway 1. It is constructed in the Art Deco style.

(Facts are from the official website of the Golden Gate Bridge, Highway and Transportation District.)

Grateful to God and thankful to the group administrators for graciously featuring this image on the home pages of the Fine Art America groups:

Photo copyright © 2013 Brian Tada. To the glory of God. All rights reserved. Duplication, downloading, distribution or alteration of this photo in any way is strictly prohibited without express written permission from the artist.

Thank you very much, Charlotte!

Kim, thank you so much for your gracious compliment!

Nancy, thank you so much for your kind words!

Thank you very much, Khalid!

Thank you very much, Deepa!

Thank you very much, Ann!

Thank you very much, Sandi!

Thank you very much, Joseph!

Thank you very much, Elena!

Only 5 votes for a "Road Trip" across America. This has to be my favorite. F/L & V

Thank you very much, Maria!

Thank you very much, Dagmar!

A gorgeous vibrant shot of the Bridge in my former home town. f/l/p/t/g+

Mary, thank you very much for your kind words and promotion on social media, greatly appreciated!

Wonderful Capture Brian, with the sun hitting the bridge. - Al,

Thank you so much, Al, for your wonderful comment, appreciate it greatly! Am honored by your visit and for taking time viewing this image. God bless you, have a great day/week!

Hi Donna, thank you very much for your kind words! Honored by your visit and F/L support, thank you so much! The day this image was taken was a particularly clear one God provided beautifully. Have an awesome week!

This is amazing !!! Well done I love all the colors. This is on my bucket list to one day see.

Hi Jennifer, thank you so much for your wonderful compliment! Greatly honored by your kind words and for stopping by! The best time to see San Francisco would be Sept.-Nov. and in the Spring (April), when the fog is not as prevalent. Hope you get the chance to visit the bridge and the many landmarks in the Bay Area. Thanks for your leadership and all you do for your amazing FAA group, "COLOR WONDERFUL PHOTOGRAPHY GROUP"! God bless you!

Greetings Mitch, thank you very much for your beautiful comment, it is truly an honor to receive your visit and kind words! Thank you for your l/f support, greatly appreciate it. God bless you, have a super week!

Gorgeous photo, Brian. One never tires of looking at this beautiful piece of architecture.

Hi Jamie, thank you so much for the honor of your visit and kind words! Greatly appreciate it. Blessings, have a wonderful week!

Beautiful image! You were lucky to be there on such a clear day!

Thank you, Suzanne, for your kind words on this image! It was truly a remarkably glorious sunny day on the bay. Thank you for the honor of stopping by! Blessings, have a great weekend!

Bless you Mary Lou and thank you very much for the honor of your visit and kind words! I finally stopped and took time to savor this view in person after many years traveling over this bridge. Thank you for your gracious v/fv support! Blessings!

Wow what a beautiful shot of the golden gate, I love the colors and light here Brian!!! L/F

Hi Marvin, thank you so much for your kind words, especially the "wow" part! It is truly an honor to receive your compliment. Thanks for stopping by and for your L/F support, greatly appreciated! Keep up the great work on your outstanding artwork, you are an inspiration!

Thanks so much, Kate! It is a great honor to receive your kind words. It is a joy to display the beauty of one of the many gorgeous landmarks of San Francisco. Thank you for stopping by! Have a super day/week!

This is a very delightful image of o9ur Golden Gate Bridge! The afternoon lighting brings out beautiful colo9rs. I love the rich blues and the way they contrast with the bridge.

Thank you very much, Linda, for your kind words! Greatly appreciate the time you took with your generous comment and observations. I've traveled over this bridge countless times, and finally paused to enjoy it from this perspective. Thank you for the honor of your visit!