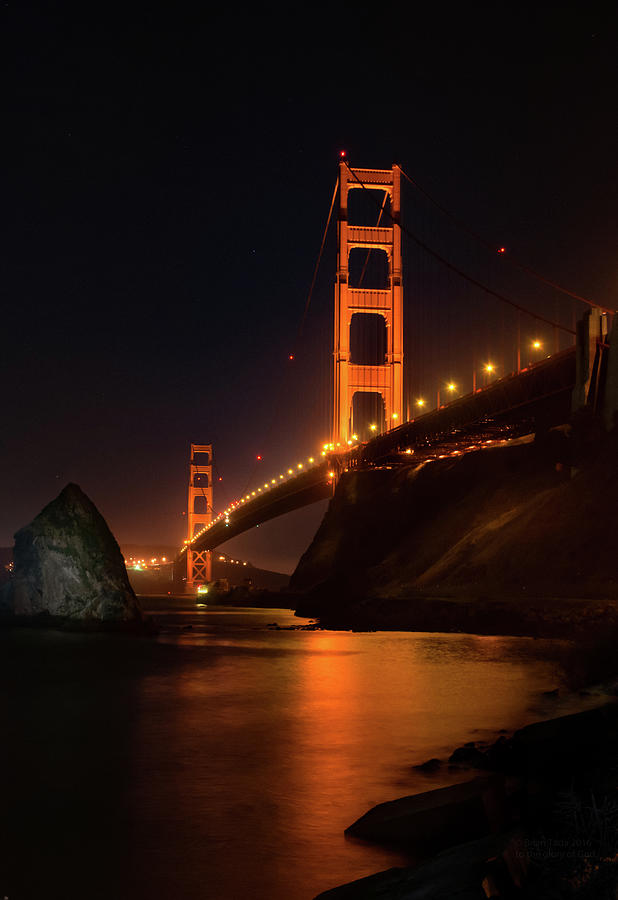 By The Golden Gate

By The Golden Gate

11.26.2016:: A big THANK YOU to the buyer from Tucson, Arizona, who purchased a greeting card of this image. Am greatly honored, thank you, and enjoy your purchase! God abundantly bless you!

Grateful to God and thankful to the group hosts for graciously featuring this image on the home pages of the following groups on Fine Art America:

The lights of the Golden Gate Bridge are reflected in San Francisco Bay on a mild evening in November 2016.

I have traveled literally thousands of times over this famous icon, yet never tire of its beauty.

The spotlights illuminating the twin 750-foot towers were installed in 1987, shortly after the bridge celebrated its 50th Anniversary.

These beautiful lights remind us of how God calls each of us to be a light to the world.

The words of Jesus proclaimed from the shore of Galilee in Israel echo through the corridors of time to the present::

"You are the light of the world. A city set on a hill cannot be hidden. Neither do people light a lamp and put it under a basket. Instead, they put it on a lampstand so it gives light to all in the house. In the same way, let your light shine before men so they may see your good works and glorify your Father in heaven." (Matthew 5:14-16, Tree of Life Version [TLV]).

I will be forever grateful to God for the honor of visiting Israel, the birthplace of my faith in Christ. My journey to the Holy Land began over this bridge to the airport, then flying to the other side of the globe to where my Lord, Saviour and Messiah taught these life-changing words as part of the beloved Sermon on the Mount at the magnificent shoreline of the Sea of Galilee.

The Golden Gate Bridge is considered one of the engineering marvels of the world. Construction on this spectacular span commenced on January 5, 1933. It is designed in the Art Deco style of the early 20th Century. The fabricated steel used in its construction was manufactured by Bethlehem Steel plants in New Jersey, Maryland and Pennsylvania, and shipped through the Panama Canal to San Francisco.

When it opened to traffic just four years later on May 28, 1937, it was the world's longest suspension span, a record held for 27 years until New York City's Verrazano Narrows Bridge was opened on November 21, 1964, which is 60 feet longer.

As of January 2014, 2,025,883,491 vehicles have crossed the Golden Gate Bridge in both the northbound and southbound directions since its opening in May 1937. The bridge carries traffic for U.S. Highway 101 and California State Route 1.

(Facts are from the official website of the Golden Gate Bridge, Highway and Transportation District.)

Photo copyright © 2016 Brian Tada. To the glory of God. Downloading, distributing, displaying online and/or altering this image without the express written permission of the photographer is strictly prohibited. Licensing of this image is available; please inquire for details.

This is awesome image of Golden Gate, Brian! FL

Incredible night capture, Brian! Love the lights and the glow on the water! Wonderful work!

Wonderful! Such a wonderful view! The perfect painting for your home, office or cafe! L. F.

I've only seen it a few times, but the glow in the bay makes the shot. Beauty, Brian. - Mike (V/F)

An incredible night shot of the Golden Gate. It's even a little spooky, but makes a statement to the beauty of the Bay Area.

Thank you so much, Kim! Truly appreciated!

Revisiting this outstanding shot of yours!! So great

Thank you very much, Johanna!

A gateway to a beautiful city which will one day be redeemed.

Matt, thank you for your comment, which I appreciate and am praying for that to happen!

Thanks very much for the honor of your revisit and kind words, Constance!

What a fabulous night view of this iconic bridge!

Thank you very much, Andrew!

you have created a magical scene. L/F

Thank you very much, Constance!

This is such an amazing image, Brian!! Fantastic composition and exposure work!!! Love it!!! :)))vf

Laurie, thank you so much for your lovely comments, so kind of you! God bless you!

~ This is So Stunning and very Excellent Artwork! You truly are a Professional Artist and I think I can learn a lot from you! Thank you for showing your talents to us! ~ Sincerely Cia ~

Cia, thank you for your very kind words, truly appreciated! I thank God the Master Artist for His creative gifts He has given each of us. Massive blessings!

Thank you so much, Johanna, for your kind words and Tweet, greatly appreciated! Blessings!

Ann, thank you very much, glad you like it! Blessings!

This is so great!

Thank you very much, Nicklas! To God be the glory! Blessings!

More than gorgeous and glorious! LF

Thank you so much, Johanna! Greatly appreciated! Blessings!

Thank you very much, Wildlife Fine Art! God bless you!

Pamela, thank you so much for your kind words and honor of a feature in your amazing group! I am so sorry for my great delay, as I was care-giver for a dear family member and just getting back to being on FAA. Appreciate greatly your wonderful leadership, time and support of artists. God bless you!